On May14th 2018, the prices of acetic acid in Shandong and Northwest China increased by RMB 50-100/ton, which is a year-on-year increase of 85%, which is close to a new high since 2008. Because of the production halts of acetic acid plants in overseas markets such as Singapore and the United States, the domestic acetic acid export situation is better, driving the overall market price increase.

At the close of trade on 12 October, acetic acid prices in east China stood at Chinese yuan (CNY) 3,700-4,000/tonne ex-tank, representing an increase of CNY850/tonne or 29% from 1 September, according to ICIS data.

China was on holiday on 1-8 October for its National Day and Mid-Autumn Festival.

Operating rates at domestic acetic acid producers averaged 85% during the holiday, which would usually lead to a pileup in stocks, market sources said.

However, most suppliers in east China were only catering to contractual customers with no cargoes available for spot sales, while those in north China could only ensure supply for neighbouring regions.

Moreover, domestic spot supply may further tighten this month as local producers are looking at exporting more volumes than usual, to cover the shortfall of US cargoes into the European markets, the sources said.

Market sources said that US supply was disrupted following an explosion on 4 October at the US-based acetyls producer Eastman Chemical’s complex in Kingsport, Tennessee. The complex has 255,000 tonnes/year of acetic acid capacity.

The producer reserves most of the acetic acid output for its own downstream acetic anhydride production, sources familiar with the matter said.

On 10 October, Celanese announced a CNY400/tonne hike in its list and off-list selling prices for acetic acid in China, effective immediately or as contracts allow, according to a statement obtained by ICIS.

Looking into the second half of October, most market players are bullish that downstream demand remained healthy and inventory levels have yet to recover.

However, some industry participants took a backseat in view of price declines in feedstock methanol, wary of a market correction after a recent strong run-up in acetic acid prices. 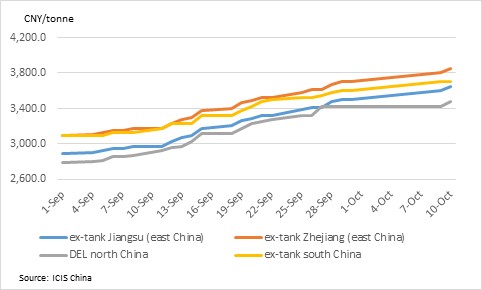 Pictured above: Cans of paint. Acetic acid is used as an intermediate in a wide range of products including fibres, paints, adhesives, pharmaceuticals and printing inks. (Source: imageBROKER/REX/Shutterstock)

0 In Total [View All]  Comments